The kitbashing urge remains strong... even as the painting urge remains zero! Fortunately, the Stargrave plastics offer ample opportunity to muck around with plastic and build some random stuff!

Since I first saw the AK-looking weapon in the Mercenaries kit, I've known that it would eventually find its way onto a Stalker-type model to accompany my existing zone raiders. Moreover, one of the torsos in the same kit (the one with the chest pouches) was a vaguely near-future SOF-style get-up. I even grabbed a helmeted head, backpack, and grenades from the same kit, causing me to worry that I was building a 'stock' figure for the first time in ages!

Fortunately, my desire to add stuff to the model to really kit him out like a seasoned zone raider meant that I had to dive into my bits box to find some random gubbins. There's a Geiger counter bit of tech on his left hip that's off the Necromunda Van Saar sprue, and a bedroll from... somewhere. Canteen, holstered pistol, knife, and a couple of extra pouches from various Warlord WWII kits rounded out the ensemble.

So, I give you Chernobog, an ex-Spetsnaz operative, now active in and around the Zone. 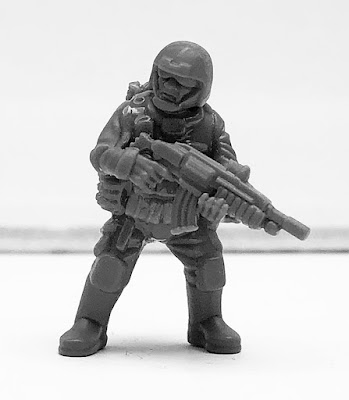 Still need to finish off a couple of things (filling some gaps with green-stuff and drilling out the gun barrel), but otherwise he's ready for basing and painting!

Having built my Space Devils the other week, I was still in the mood for kitbashing with the new Stargrave sprues. Fortunately, the sample Crew sprue had arrived, so I had even more options to play with!

I love Dwarves in Fantasy, and I love Space Dwarves in Sci-Fi. Normally, I'm not interested in 'Fantasy in Spaaaace', but there's something about Dwarves that transcends that. Perhaps it's the 'dour engineer' stereotype meshing so well with the classic Fantasy Dwarf stereotype. Whatever it is, I have no problem with Space Dwarves even though I might scoff at Space Elves/Orcs/Goblins/etc.

I've been sat on a box of GW's Kharadron Overlords Arkanauts for quite some time, without really having any plans for them - I like their boiler-suited look, and some of them aren't overloaded with bits, pieces, gubbins, and skulls. All told, a cracking starting point for a more industrial Space Dwarf. To this, I added one of my favourite heads from the Ghost Archipelago Crew sprue (the last time I used this particular head, I managed to mangle an ear... happily, I avoided that this time!). The arms are both off the Stargrave Crew sprue - I've been waiting to use this shotgun since I saw the digital renders! This was the trickiest part of the kitbash. While the separate supporting arms make porting across to different kits easier, the Arkanaut body is very wide, and the flat surfaces where the arms attach slope in towards the chest. I had to flatten those surfaces out a bit, and actually used a different supporting arm than the one intended for use with that particular shotgun. A little slicing and filing, and the judicious application of polystyrene cement, and it's worked out pretty well! 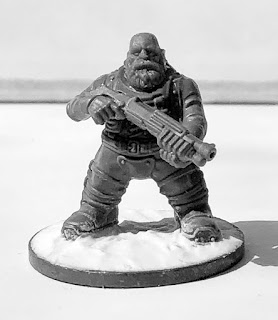 Incredibly chuffed with this guy, and looking forward to getting him painted up!

I've been in a real lull minis-wise recently (since, umm... July), but am, finally, back on the horse!

The other day, I got a parcel containing something I've been eagerly awaiting for months - a pair of test sprues for the Stargrave Mercenaries and Troopers (still not seen the Crew!). Having checked these to get them rolling for production, I couldn't resist kitbashing a few crewmembers. Naturally, I also couldn't resist mixing in a variety of components from other kits...

I've always had a soft spot for Star Wars' Devaronians - the space-demon-looking chaps. No idea why, really - I just like the look!

Fortunately, I also happened to have a sprue of the Frostgrave Demons, which includes a couple of heads that work perfectly for Devaronians and also fit nicely with the Stargrave figures in terms of neck joint and scale.

My first one was a simple kitbash - Trooper arms on a Mercenary body with a Demon head. The only work that was needed for the head was to flatten off the ball joint on the bottom of the neck a bit to both reduce its length and fit better in the socket on top of the body. He's not quite finished - I still need to base him (once I've decided how I want to do that) and drill out the gun barrel. 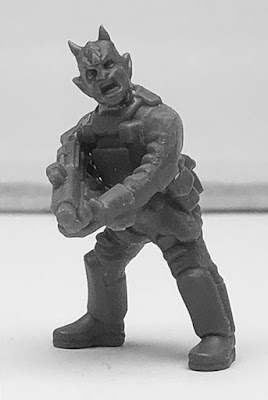 Having got this guy done as proof-of-concept, I decided to try something a little more involved for my second one. The base elements of this second Devaronian were the same - Demon head, Mercenary body, Trooper arms (this time the machine gun from the sprue). Given that he was toting a big, ammo-chewing gun, I dug out the large backpack from the Frostgrave Knights sprue. This didn't quite fit flush to the back of the Mercenary body, but a little bit of filing and carving soon fixed most of that, while a knife from one of the Stargrave sprues filled a small gap and some ammo pouches from a Bolt Action sprue over each shoulder helped make it feel a little more heavy-duty. At this point, I felt that the backpack itself was a bit plain, so I found some random pouches from my bits box and mounted them to the sides. 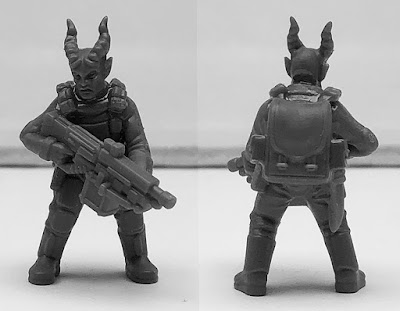 Really enjoyed both of these and am very happy with how they came out. My kitbashing was a little rusty after going so long unused, and my use of polystyrene cement was a little heavy-handed, but it's good to be back!

Having built and painted the kennelmaster, it was a somewhat tough wait for his hounds to arrive! Fortunately, Otherworld Miniatures delivered two packs of their war dogs really quickly (many thanks, Otherworld!), so he wasn't long without his best friends.

These were the first metal miniatures I'd worked with in quite some time, but there was barely a mould line to be scraped away - really lovely, clean sculpts. The paintjob was basic, but is nice enough in person, though I cannot, for the life of me, take a decent photo of them! 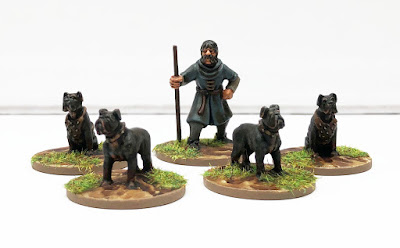 And that's it - the last unit I currently have planned for The Nameless Army. There will be more, I have no doubt, but it's time to move onto something different for a bit. Of course, I am waiting on a couple of upcoming kits (no spoilers) that are earmarked to provide characters for the force, so there's a good chance they spin out into full units, and I have just caught myself thinking "maybe they need an artillery piece...". And I do quite fancy adding some more light infantry, perhaps in the form of scouts and militia. Yeah... this isn't over, is it?

***
Disclaimer: All links to third-party sites are solely for the purposes of sourcing the products I have discussed, if anyone is so inclined. I have simply linked to the original manufacturer or the source I used (but feel free to shop around!) and make no money from people clicking through.
Posted by Phil at 08:58 4 comments:

This chap, thrown together using parts from the Fireforge Folk Rabble kit and the head from an Oathmark Human, marks the first of the final five models currently planned for The Nameless Army. 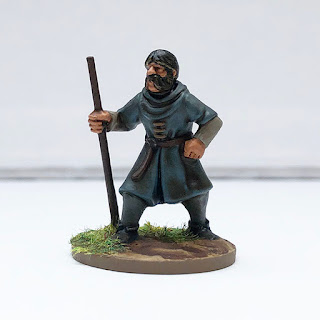 He's a kennelmaster, and will be joined in due course by a pack of hounds. Right now, he is armed with little more than a staff and a ferocious moustache. His mutts are under way, and should be finished soon, but I got this guy started while waiting for them to arrive.

The staff is just a metal spear cut to size. While he's painted to match the light infantry, I wanted a slightly less 'rank-and-file' feel, hence opting for a less military choice of equipment and a slightly more flamboyant head. 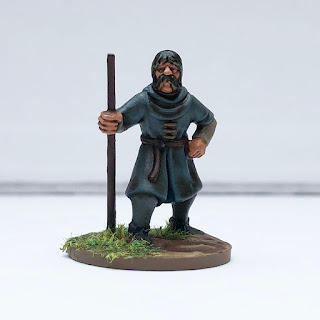 All told, I'm really pleased with how well he came out, considering the simplicity of the model!

***
Disclaimer: All links to third-party sites are solely for the purposes of sourcing the products I have discussed, if anyone is so inclined. I have simply linked to the original manufacturer or the source I used (but feel free to shop around!) and make no money from people clicking through.
Posted by Phil at 16:12 No comments:

Phil
A lifelong military history enthusiast, thanks to early exposure to Asterix the Gaul, I carried this interest through an undergraduate degree at Lincoln College, Oxford, and into a career as an editor at Osprey Publishing. After several years working simultaneously on military history and wargaming titles, the success of the latter led me to create Osprey's dedicated gaming division in 2014, and bid farewell to books on Ottoman warships and Vietnam gun trucks. Since then, Osprey Games has expanded its focus to incorporate board and card games alongside its ever-growing line of wargames.