From The Vault: Wuxia

I've previously posted about my love of Song of Blades and Heroes, so I won't go into that again. This, however, is my second warband for that game – a monastic order based on wuxia and old kung fu movies. 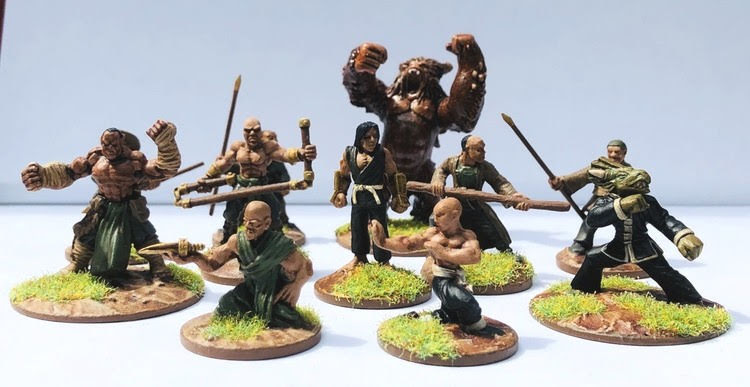 This is a really eclectic mix of figures, featuring miniatures from five different manufacturers. There's a lot of variation in the sculpting (both scale and quality) but, with a relatively unifying paint-job, they all fit together. 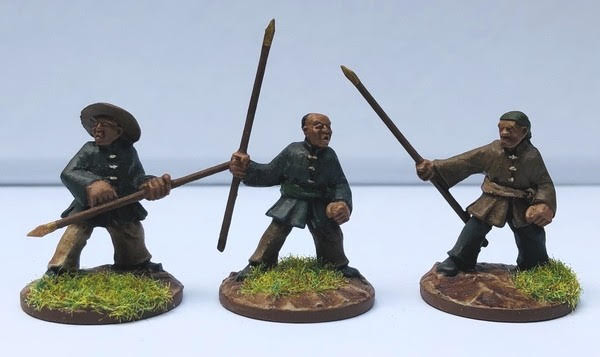 The gang does include more options than the average game of SoB&H would normally allow, so I threw in a few spear-armed peasants to help round out the force if there was a point of two going spare. These Redshirts are Foundry Chinese pirates, converted to hold wire spears.

The core of the gang are its fighting monks, and these three all come from Reaper. 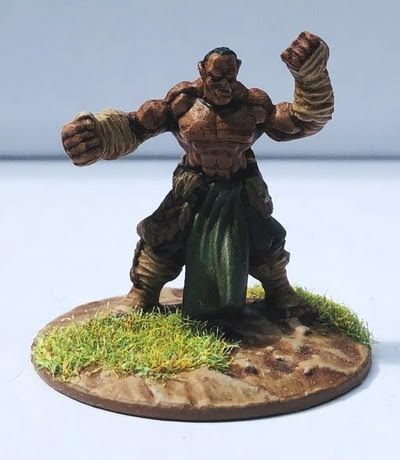 Every warband needs some heroes, though, and its first was this monk, again from Reaper. It's officially a half-orc, but I ran it as a demon seeking redemption through meditative contemplation... and kung fu. 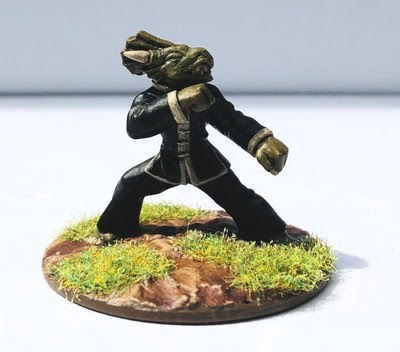 The second is a dragon-headed Bruce Lee-style miniature from Hasslefree. This was the last figure painted before the project was pushed to one side, and so he never really got a backstory (or even a statline, if I recall correctly). 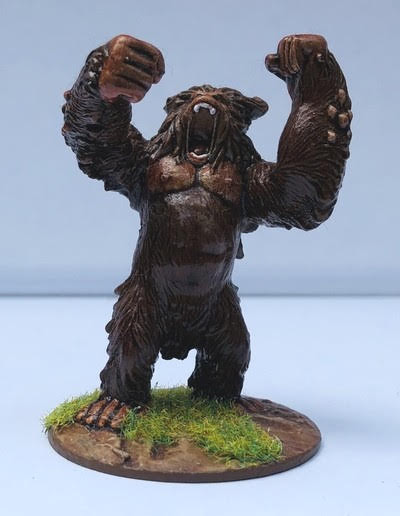 One thing that was almost always fielded was this big dire ape (a D&D pre-paint), run as a Yeren ("Chinese Wildman – a bigfoot-like creature). Although mouldlines on fur are always a pain to clean up, I do really like this model. 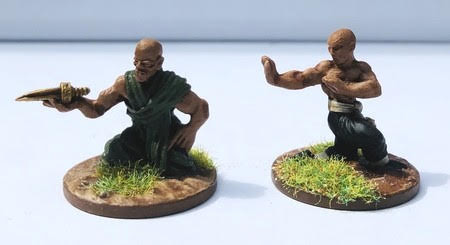 Leadership (and some magic) was found in the form of these two. The one on the right is another Hasslefree martial artist, fielded as the top student of the temple, while the one on the left is the abbot – it's a model from the now-vanished (I think) Chinatown game from a company called Stone Circle.

Painted around the same time as the above gang, these terracotta warriors are from Renegade. They were painted up really quickly (and shonkily, even by my standards!) for reasons that escape me now. And, no – I have no idea what that is on the chest of the one on the right...

***
Disclaimer: All links to third-party sites are solely for the purposes of sourcing the products I have discussed, if anyone is so inclined. I have simply linked to the original manufacturer or the source I used (but feel free to shop around!) and make no money from people clicking through.

Email ThisBlogThis!Share to TwitterShare to FacebookShare to Pinterest
Labels: Fantasy, From The Vault, Wargames

Phil
A lifelong military history enthusiast, thanks to early exposure to Asterix the Gaul, I carried this interest through an undergraduate degree at Lincoln College, Oxford, and into a career as an editor at Osprey Publishing. After several years working simultaneously on military history and wargaming titles, the success of the latter led me to create Osprey's dedicated gaming division in 2014, and bid farewell to books on Ottoman warships and Vietnam gun trucks. Since then, Osprey Games has expanded its focus to incorporate board and card games alongside its ever-growing line of wargames.